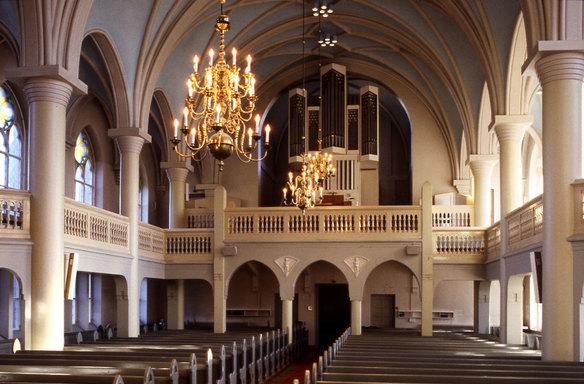 The new-gothic style church was built in 1917-1918 and architect Josef Stenbäck designed the church.

The glass paintings of the altar are widely known. The three paintings symbolize the birth of the Christ, the crucifixion, and the resurrection. They were made by Erik O. W. Ehrström and his wife Ollie in 1923.

There are three bells in the church tower and they were donated by K. E. Palmen.  The biggest one is called De Gloria (Glory for the God), the middle size bell is called Patriae Lux (Light for the home country) and the smallest one is called Labori Pax (Peace for the work). They weigh 3 560 kg altogether.

The organ of the church has been made in Espoo by an organ manufacturing company Veikko Virtanen in 1979.

A guide is available during the opening hours of the church, otherwise by request.